Is it time to let go of our obsession with anatomy?

I was inspired to write this by Jenna Zaffino’s story in episode 52 of Pilates Unfiltered – I don’t want to put words in Jenna’s mouth so you should listen to the episode after reading this if you’re interested to understand her point of view.

As movement teachers – Pilates professionals, exercise physiologists, physiotherapists – for years we have operated on the assumption that understanding anatomy, physiology and biomechanics are foundational to being an effective practitioner and teacher.

I think this assumption is wrong. You don’t need to know anything about anatomy, physiology OR biomechanics to effectively teach Pilates or help people rehabilitate.

Yep. Anatomy is not important when teaching Pilates. In fact, I think it gets in the way of good teaching.

I will even go so far as to say, you don’t need to know ANY anatomy, physiology or biomechanics in order to be a great teacher and practitioner. The less the better. This is a picture of a shoulder girdle I drew to help with my anatomy studies at university. Cool, right?

I say this as someone who understands and enjoys anatomy, physiology and biomechanics. I have a masters degree in exercise physiology, and I have written extensively on biomechanics-related issues in exercise and rehabilitation, for example, this blog on the biomechanical argument for lifting with a flexed spine.

Here’s the thing though: The only time I actually apply my detailed understanding of muscle anatomy, neurophysiology and biomechanics is to (politely) argue with people that these concepts are not important when teaching movement in a fitness or rehabilitation setting. For example, the whole spinal flexion discussion I linked to in the previous paragraph.

8 reasons we should focus on other things instead of anatomy

A wide body of research suggests that as humans learn a movement skill, focussing the attention on a point OUTSIDE the body increases the speed and quality of learning. Check out this 2010 review by Gabriele Wulf et al. of the key factors that influence learning of movement skills

For example, instead of asking a client to ‘contract your psoas’, asking them to ‘lift your the knee of your leggings towards the ceiling’ will likely result in better learning.

We also know from motor learning research that, when humans begin to learn a new movement skill, we tend to focus on the individual components – for example when learning to drive we think about what each hand and foot is doing.

As we become more skilful at a particular movement, we represent that movement at a higher locus of control – which is to say we think in more general, or global terms. For example as an experienced driver, you most likely think about what speed you want to go, or which route you want to take, rather than what your hands and feet are doing. This is true for all movement skills.

By asking our clients to focus on the anatomy of a movement, we focus their attention inside their body and draw their attention to the details of the movement., essentially regressing them to an earlier stage of learning. Both of these things retard learning.

Focusing attention on something external – for example, music, or the results of your movement, increases endurance, compared with focussing on the sensations of moving, which reduces endurance. For example, instead of focussing on contracting a particular muscle, attending to the movement of the reformer carriage, the weight stack or the bar will increase the number of quality reps your client can achieve.

3. It distracts the teacher’s attention from what is important 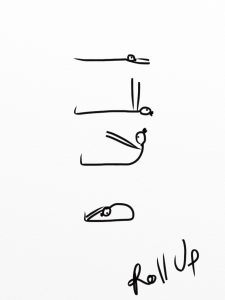 For example in roll-up the spine makes a C, the legs are straight, the ankles flex as you roll up. Further, there is a rhythm to the movement of the arms, head and torso (look through the window). Being able to reel off the names of muscles is not in any way useful for you, or your clients’ understanding of these shapes and rhythms. It is essentially irrelevant. A distraction.

Worse than a distraction, as we know from motor learning research that excessive explicit instructions will actually make it harder for your clients to learn the proper shapes and rhythms.

The best way to learn the shapes and rhythms is first, watch someone do it, then try it yourself. Then get feedback (on your shape and rhythm). Then repeat this process a lot. Here is an anatomically accurate picture of the shape of roll up from Joseph Pilates’ book Return To Life With Contrology, hand-drawn by Nicole Mazurkiewicz.

4. It’s not part of Pilates

Regardless of the science, cueing anatomy doesn’t actually come from Pilates. In Joseph Pilates’ writings, he never mentions the name of a single muscle. Neither does he use the words core or powerhouse. Those came later, and from other people.

In fact in Return to Life with Contrology Joseph says (we must not) “devote ourselves only to the mere development of this or that pet set of muscles, but rather more rationally to the uniform development of our bodies as a whole”.

Ironically physiotherapy and exercise science have largely moved on from cueing individual muscles (on account of the motor learning research above, and also rehab science research below), but the idea seems to have got stuck in the minds and practice of us Pilates folk.

When asked ‘what is this exercise good for?’ I have heard that Joseph Pilates replied ‘It’s for the body!’.  His cueing involved mainly demonstration and manual guidance, both of which are now known to be extremely effective teaching tools.

5. It gets in the way of rehabilitation

Since the early 2000’s, evidence has been building that what is called the biomedical model – the idea that the human body functions like a clockwork machine – is not our best model for injury and rehabilitation.

The biomedical model assumes that pain is an indicator of tissue damage, or dysfunction (in my view a very problematic term, that is extremely hard to define, but we’ll get into that in another post).

If we take a biomedical view (pain indicates dysfunction or damage) then knowing the anatomy makes sense. In order to fix the anatomy, we need to understand the anatomy.

However, this approach really hasn’t worked.

Since 2003 the best practice, as defined by 15 national clinical guidelines from around the world, including the current Australian clinical guidelines has been to use what is called the biopsychosocial model. The biopsychosocial model of injury and rehabilitation views pain as a complex multifactorial phenomenon, arising from an interactive combination of biological (e.g. tissue status), psychological (thoughts, emotions, beliefs) and social (social support, meaning, engagement) influences.

The current scientific understanding of pain acknowledges that there is almost never a single, linear cause and that most musculoskeletal pain is not related to tissue damage. For example around 90-95% of all back pain is unrelated to any identifiable tissue damage.

The current best practice for treating musculoskeletal pain, according to a 2010 review of 15 national clinical guidelines across the world, is (after screening for serious medical causes like fracture and cancer) to provide reassurance and advice to stay active.

For acute pain, the guidelines specifically recommend against a structured exercise program.

So, providing the best practice, guideline-based care for your clients with musculoskeletal pain is easy – after they have been screened for red flags (cancer, fracture) reassure them that nothing serious is wrong, and advise them to stay active.

Staying active means doing your normal activities as much as possible. So keep doing your Pilates class, just don’t do a special ‘rehabilitation’ routine to strengthen, stretch or activate any particular muscle.

6. It scares and confuses teachers

So many teachers get themselves in a tizzy because they feel anxious about their incomplete understanding of anatomy and biomechanics. This is a problem because it is bad for the teachers, all that anxiety is not fun. Also, it is bad for the clients, when the teacher is stressing out and indulging in negative self-talk about anatomy, instead of paying attention and connecting with the client.

This problem is confounded by the next point, anatomy snobbery.

7. It fosters a culture of anatomy snobbery

We all like to be part of the in-group. In Pilates, we often signal that we are part of the in-group by using anatomy jargon. This serves a dual purpose – it builds us up and establishes expertise and social status, whilst at the same time excluding or ‘putting in their place’ those who don’t have the same ability to reel off anatomical terms.

There is pretty much nothing you can say using Latin anatomical terminology, that you can’t say in plain English. Use plain English.

Here is another one you may find surprising. It didn’t come from Joseph (he never focussed on any individual muscle or muscle group) and it’s not supported by science.

There are so many reasons for this. We know from many later studies that muscle activation is

Further, people with sore hips often have MORE activity in their glutes compared with pain-free people.

The notion of ‘correct’ muscle firing patterns is just plain unscientific. For example, seven systematic reviews of core muscle activation for low back pain have found it no more effective than any other form of exercise. Further, it appears that changes in muscle activation, size and strength are not related to changes in pain.

Instead of this anatomy jargon

Use this plain English phrase

Wouldn’t it be wonderfully freeing to not worry about anatomy?

Joseph didn’t worry about it.

There is no really good reason to worry about it!

Sure, it’s interesting. I love cell biology, and neurophysiology, and the biomechanics of lifting – but I know to keep my interests private, or talk about them only with other people who I know share my interests.

Just like other geeky hobbies that nobody else needs to know about like bird watching, chess, railway spotting and flower arranging; if we love those things, we should indulge in them, but we shouldn’t inflict our hobbies on everyone else or confuse our own interest for usefulness in other areas.

Take Your First Step To Becoming A Pilates Instructor

Book A Time To Talk With Us